April 03, 2017
Avid MediaCentral has been with us for some time now and yet it is still a mystery to a lot of people to what it actually does. This short guide aims to inform you of what it is and what it does. This isn't an operational guide just a grounding to understand what it does.

Avid MediaCentral first landed in the form of Interplay Central back in 2012, but this was not the first time we had seen it. Unsurprisingly, just like Avid Interplay, the code was acquired through Avid purchasing another company, Max-T. Known for its 'SledgeHammer' NAS, Max-T developed a remote editing application in late 2008 from technology developed in the creation of its NAS product. It was called MAXEdit and was shown at NAB 2009. I remember watching the demo. It was an amazing product that obviously caught the eye of Avid as they bought the company in Mid 2009 burying all its products along with it.

At the time of purchasing Max-T, Avid Interplay had been around for 3 years and offered limited editing through it's thin(ish) client 'Assist.' Assist was a great tool but it still needed installation and set up on qualified workstation and GFX card owing to the playback engine being used from Media Composer, therefore it made it quite expensive to deploy on larger sites.

Most editing on an Interplay system, at the time, would be carried out on either Media Composer or NewsCutter, but the idea of being able to use a web interface through something like MAXEdit was too tempting to overlook. MaxEdit went behind closed doors at Avid as project Morpheus and went through a rebirth into Central in 2012 and later being re-branded to MediaCentral.

MediaCentral works hand in hand with Avid Interplay, it also works with Avids MAM but lets not get bogged down in that right now; so for those who are unfamiliar with Interplay here's a quick overview to help you understand where MediaCentral sits within the Interplay design.


Recap. What is Avid Interplay?

Every Interplay on the face of the planet is made up of an ISIS or NEXIS shared storage system at its heart, which is where all the video content is stored. The Interplay Engine houses a database that manages and tracks all content that exists on the system. This is also where the system is configured and managed from. The Media Indexers role is to track content on nominated Workspaces on the central storage system. It informs users on editing systems and the Interplay engine, where constant can be found for use or indeed it is available to use. The Look Up server maintains a table of all computers and systems on the network to ensure content and features are delivered in a timely manner. The Interplay framework is made up of a number of services and applications that run on all systems within the Interplay workgroup. Media Composer systems are also made part of the Interplay environment and rely upon information from the Interplay Engine, Media Indexer and  Look Up Server in order to locate content and create edits.

NOTE: This is a very simplified view of Avid Interplay and I will be posting a more detailed explanation of its ability and make up later this year. 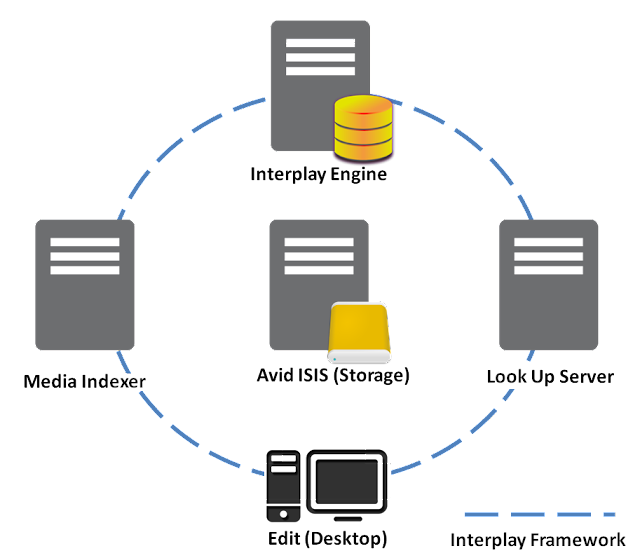 What does MediaCentral do?

The Avid MediaCentral Platform enables content that lives on Interplay to be access via a LAN or the internet. A 'Cloud' option, originally called Sphere and later renamed, can be purchased for Media Composer which allows the traditional high end editing client access to content on Avid Interplay from remote locations.

To access Interplay content from a web browser the MediaCentral UX option is used. This gives the ability to access content through a web browser. The browser interface has tabs giving users access to areas for searching, logging, editing video and stories as well as delivering content to its final transmission platform, be it video for studio or web content. This can be done from almost any platform, including iOS and Android devices, almost anywhere on the planet.

It is this ability that has given rise to the "Avid Everywhere" tag line.

MediaCentral also gives the ability to merge both Avid Interplay and iNEWS into a single common interface. This function allows journalists to create stories and scripts in iNEWS and then cut packages together and submit them for transmission in a single web interface. 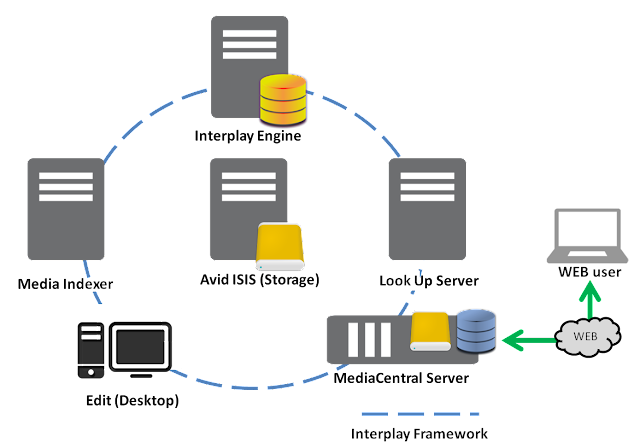 The ability to work like this comes from the back end MediaCentral Platform server and its ability to create proxy media on the fly from the high resolution content living on Avid ISIS or Avid NEXIS storage systems. These 'proxy' files are temporarily stored on the Platforms internal storage on the MediaCentral Servers eventually expiring after a certain time if people no longer need to rather play them. Multiple platforms can be brought together in a cluster to offer load balancing and resilience against server failure.

The ability to have 'on the fly' proxy's means that there is no longer a complex multi resolution capture workflow needed for web based clients, as used on earlier Interplay systems. Because the web users are effectively using the same content as anyone else on the system, this means that if an edit is built within the MediaCentral UX interface it can be picked up inside Avid Media Composer and edited further still using the full resolution content, instantly.


Update:
Another great resource to keep your eye for Media Central uses is Avid's Next Generation NewsRoom blog. This is almost exclusively focused on the use of Media Central within the News Room and how it can be used.

NEWS
Avid Interplay PAM has transitionally been used by News Rooms to help automate the entire process from acquisition to delivery of video content. These systems, in some cases, can have anywhere up to 330 real-time video editing clients and over half a Petabyte of data. With the addition of Avid MediaCentral this means further users can be added to the system as well as being able to work remotely with extended functions such as being able to distribute finished video articles to websites for online streaming or even to social platforms such as Facebook, YouTube and Twitter. 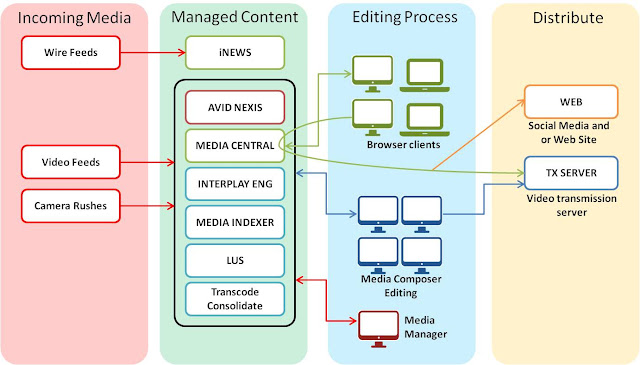 Simple possible workflow for a newsroom operation with MediaCentral available


Systems that are used in News rooms environments can become very complex with multiple servers used to create a single operational Interplay with high reliability and availability.


Post Production
There is more and more demand for Post Production workflows to offer access from remote sites. In some cases, where producers and directors need to review edits and shots, the MediaCentral UX interface can be invaluable and also allows content to be kept in sync and even have simple edits prepared on set for use by the editor back in the facility. Edit suites can also be taken onsite / set and selected material be submitted back from the set to the Interplay as well as allow access to content already on the Interplay.

To facilitate this in a cost effective manner smaller systems that run on single physical servers can be used in these cases. Avid are also allowing servers to be visualised when demand on the systems is relativity low. I have discussed this in a previous post here.

So that's it in a nut shell. MediaCentral simply gives users remote access to content that lives on a Avid Interplay environment.


It's worth noting that MediaCentral is seen as a major component for Avid and this is reflected in the establishing of the MediaCentral Platform Alliance Partner Program. This program opens out the platform to third parties to help integrate their product into MediaCentral and allow it to engage with diverse and emerging markets.

With NAB just around the corner, I'm sure well see the next generation of MediaCentral being showcased by Avid on the stand.