August 23, 2017
Avid Media Composer has been around longer than I can bear to think about. It's been through dozens of iterations and has a long lineage of innovative tools, but at long last Avid have released it's first Free version, Media Composer|First.
But hold on, hasn't Avid been down this path before? Over 10 years ago, the then popular, Avid Xpress DV software was released in a cut down form known as Avid Free DV but it was SO limited and badly documented that it failed to engage with its target audience. But people, both within Avid and outside, will have forgotten that (?) and the ones’ who remembered it should have learnt from their mistakes. Cue Media Composer |First. 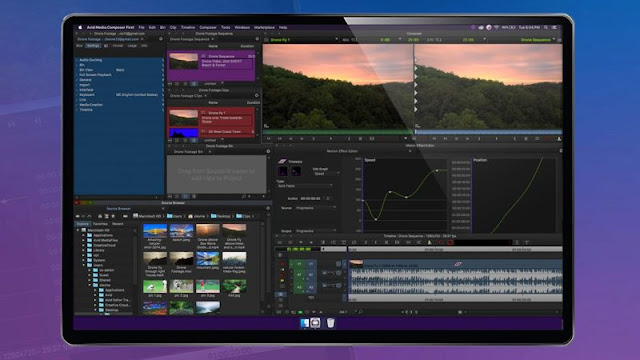 Lets get straight into it...

To download the software go to the Avid Media Composer|First site and there create an Avid account (if you don’t have one already) Once you have verified your email address and given a bit of feedback on how you’ll use it, you can then download the program (for Mac or PC.)  I ran my software on an old HP Z400 with 12 GB RAM and a Q2000 GFX card running Windows 7 Pro SP1 and it ran a treat.

On the download page, you will also be prompted with links to help “Get Started Fast” with video tutorials, a quick start guide, the community forums, and your Avid Master Account where you can access downloads and updates.

The installation process is much the same as the standard Media Composer, so you'll need to have a reasonable spec machine with at least 6GB RAM and a supported 64 bit OS. One of the biggest differences is however is that you’ll need internet connection in order to sign into your account and activate the perpetual free license or else you’ll get no further!

Once you have the application installed and you’re signed into your account you can launch fine, but if you ain't signed in then your going nowhere.

At first look the interface becomes instantly familiar to anyone who has ever edited with Media Composer and so it should, as this is the latest version of Media Composer (8.9 as type this.)

That said there are a number of key areas that define Media Composer|First.The first and obvious difference is met at the Project selection window, as not only does it contain averts (ala Adobe) but it also does not allow the user to define the projects dimensions, all that can be done here is type a name for the Project and select where you want to place it.

The Project rates and format is defined once you place the first shot into your edit and can be then seen in the Format tab, as expected.

Once you're inside though it all looks very familiar.

To all intense and purposes this is a fully functioning Media Composer system, what makes it into Media Composer First, and free, is the fact that the features have been heavily controlled and cut down.

The obvious restrictions are the number of bins that can be created... its 5! Now I know on the face of it that’s a small number but for small projects and people getting their heads around the interface it’s actually usable. It's just that your rushes bin may well become a little crowded. But as an example you can use the following naming convention to get you by?


The next area you notice is that the Settings are heavily restricted with only a handful of Setting available to the user but again the ones that are available are the important ones such as Bin, Bin views, Interface, Keyboard and Media Creation. So while it looks sparse its get everything you need...

Source material for editing with is added in the traditional Avid 'Link' / AMA way but Transcode codecs are limited, but at least are available. Consolidation is also available where possible by checking the little tick box 'Consolidate if possible.'

Editing is completely featured with fully functioning smart tools and trimming, you can also get tot grips with multi cam editing but are limited to only a 4 way gang.


You can also Publish directly to YouTube and Vimeo too. Stills can also be exported but only as PNG and JPEG and Audio also exported separately as 24bit 48KHz wav files.

Let's also not forget forget that you can also run the 'full fat' Media Composer in it's entirety for a 30 day trail if you need more functionality, but once you're trail is over you may well be little stuck!

So who's is this free software for?

This free version of the popular editing software appears to be aimed directly at the grass roots of editing. Students who want to get a foot up in the professional editing world could do a lot worse than getting hold of a copy of this and start to learn the tools that they would meet in professional editing houses around the world.

It's also worth pointing out that if you want to learn the art of editing the process is more than the simple mechanics of pressing the buttons, so how can you learn this? Well film school is a common approach but for the rest of us Inside the Edit is perhaps THE only online course that aims to teach the creative process of editing and to Avid's credit they have teamed up with them of offer 'snippets' of the course to offer an introduction to how to edit creatively (especially for documentary makers) complete with downloadable material.

Visit the Media Composer|First Inside the Edit page here and make sure you sign up for the newsletter! What's to loose it's completely free!

But as Media Composer |First can access media, edit it very competently and then allow the user to export a high quality video then it will tick a lot of the needs of Corporate video producers, VBloggers and home enthusiast's. But if they want to go beyond the ability of the systems 5 bins and limited export function then their are a number of other system out there that are free and fully functional.

So having played a little more with First I have come up with a genuine Pro use for it. While Projects and bins can't be moved from First to full fat MC the media can. Use First onset or in the office for Consolidating supported codecs or Transcoding content to DNxHD, all for Free. You're limited to local storage (or copy over the network if you have one) but if you use a pocket drive this is easily transferable. But what about the bins and seeing the content? Don't use the MediaTool! If you use a little simple folder management inside the MXF media folder, you can do the old trick of dragging the .mdb file into a bin inside Media Composer to see the contents of that folder.

As a long time user of Media Composer I think this is a fantastic Learning and limited use tool, bon't take my word for it though, download your copy and have a look