Support for NewTek® NDI Video over IP
Avid Media Composer now includes support for transmitting NDI streams directly from the
application when enabled. Similar to a client monitor, anytime you play or scrub footage others on
your network will be able to see the stream using an NDI player. By default, NDI will broadcast only
to your local subnet.

But what does this mean to editors and users?

NewTek’s NDI - Network Device Interface - technology allows devices, and applications to connect and communicate over a standard IP network, specifically 1GbE, to share video and audio. This technology has been heavily adopted in the production world but can also be utilised in the editing process through the use of specific I/O hardware, for example, the AJA Kona IP or IO IP and with the release of 2018.8 Media Composer you can use the Avid Artist DNxIP unit too.

But if you want to allow people to view your Media Composers output via NDI this can now be accomplished within the application with no need for a specific video I/O, although there are drawbacks to this in some cases.

Setting up to NDI stream

The setup to stream is painfully easy. On the timeline window, you will need to right click on the hardware toggle icon and choose OpenIO_NDI. If you have a video I/O unit this will be disabled to allow the video to be streamed over NDI. Make sure you also check the Play local audio when broadcasting option or else your local speakers are muted.

Clicking back on the Toggle Hardware icon will now cause the icon to flash and show a red arrow as seen below...

That's it. Your system is now streaming its content to anyone with an NDI receiving unit or software that is within your local network.

Setting up a client to view your stream.

On the Newtek website, you can download their NDI Toolkit for both Windows and Mac. What you want from here is to install the NDI Access Manager and NDI Monitor.
The NDI Manager allows you to define the workstation, via an IP address, that material is coming from.
So in my case, I simply added the IP address of my Media Composer and made sure that I defined it as an NDI source in the Type pull-down menu. 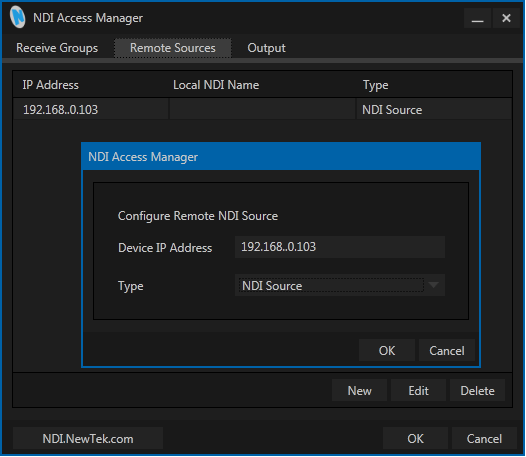 Once I had defined the source I launched the NDI Monitor and right clicked on the window and clicked on my edit suites name...

As soon as I did this I then could see my Media Composers video output... 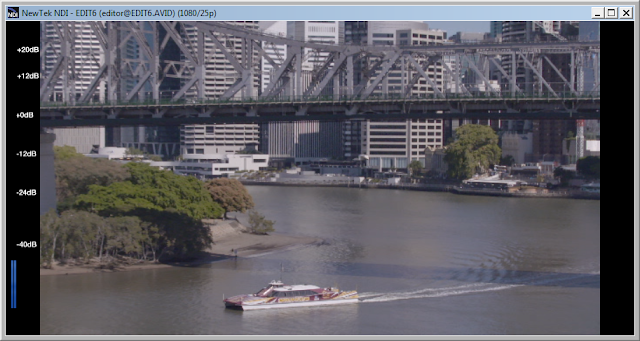 From the Monitors settings menu, you can turn on the Audiometers and graticule as well as a number of other options such as turning on a Low Bandwidth option which I assume reduces the client's data rate requirements.

Once set up the delay between the edit workstation and the clients viewing is amazingly low and the picture quality is great, especially when viewed full screen. That said I was on a small network with all clients on a single switch.

This a great tool to have up your sleeve should you need multiple people, within your network, to be able to view your edit as you can deploy the viewer to several laptops or workstations allowing all users to view your output simultaneously. Great for those lazy producers who simply can't walk down to the other end of the building!

When enabling the NDI option the video output is forced to the native codecs format and data rate, meaning that if you have a stacked timeline then you may have issues playing it back without dropping frames as the 1/4 resolution viewing option is disabled. This is especially noticeable when also using higher data rate codecs and rasters such as DNx185/220.
Because of the full bandwidth that is needed it's worth noting the Avid note below...
Note that Open IO NDI is best used over Ethernet. Avid does not recommend working with Open IO

NDI over Wifi.
I did try some XAVC 100Mbs over wifi and indeed the playback on the client was indeed jerky, switching to some single stream DNX36 content showed a massive improvement and was very viewable.
This is NOT a solution for people looking to stream content to people working from home!

It has to be said that losing your broadcast monitor is somewhat of a limiting factor. While toggling the NDI on and off to get your video back isn't too much of a headache there is a little got ya in the release notes for those with older IO hardware...
Open IO NDI is not available if you have Nitris DX or Mojo DX video hardware. You have to disable
that hardware in order to access Open IO NDI.
Which is why using something like a DNxIP or AJA unit gives you the best of both worlds with local video output as well as an IP stream.

I did notice that when skipping up and down the timeline with NDI enabled the local playback could stammer and the only way to cure this was to stop and start the playback. I didn't constantly have the issue but it could be a pain if you were using this feature a lot. Again though, if I was doing this a lot, I would invest in an external I/O unit so this would disappear.

Is this something that will change the way you edit? No, not really. It does have limitations owing to network needs and it can't really be used beyond your LAN. Some smaller houses will find this useful, perhaps for boardroom viewings. One man edit facilities, however, will have no real need for it, but it could be useful when editing on location for viewings?