I know I'm a little late to the party with this posting but I wanted to see one of these control panels in the flesh before I wrote about it, and being in the Southern hemisphere, seeing the tech early isn't always that easy. But at last I've seen them in the flesh and had a little play.

I've already posted a couple of articles about Resolve building and also around grading panels especially the Tangent Element panels that are such a good cost effective solution for a multitude of grading suites, but perhaps these panels are the game changers people have been waiting for.

I also want to point out that I am NOT an operator / grader but an engineer and so this article comes from my engineering perspective, not necessarily an operation point of view.

Back in early March Black Magic Design announces its new Mini and Micro Panel, the junior offspring of its larger Full Control Panel, now renamed the Advanced Panel. No longer would you need to use third party panels for DaVinci Resolve, but then perhaps this is also a limit, as these panels are locked into Resolve only?

It's also worth noting that in order to use the new panels you need to run Resolve 12.5.5 and above.

The Davinci Resolve Micro Panel is priced at only £800 and is a very attractive control surface.

As Black Magic state, the DaVinci Resolve Micro Panel has three trackballs (with contrast rings) with reset buttons above each trackball. There are 12 control knobs across the top of the unit for accessing primary colour correction tools - Lift, Gamma, Gain etc.

Above the centre trackball are 3 keys for switching between log and offset colour correction, as well as a key to display DaVinci Resolve’s full screen viewer.

The 9 reset buttons and 3 switching buttons are back lit keys (white only) allow for easier operation when in a controlled environment. This is the same for it bigger brother the Mini Panel too.

To the right of the colour controls are 18 dedicated keys for commonly used grading features and playback controls. I'm not going to go into these as they are operational and self explanatory.

18 functions buttons found on both panels

On the face of it the panel is well made and the quality of the track balls and knobs is pretty good for the price point. You'll need to dial in the sensitivity on Resolve to help with the resolution and feedback of the panel, but as an operator it may well be more frustrating that none of the 18 'transport and function' buttons can be re-programmed for more commonly repeated tasks that as an artist you may well use many times a day. But by most accounts the buttons are very commonly used in a day to day grade.

I'm not too sure about the long term quality and resolution of the track balls as some operators have passed comment on the quality of the units on the Advanced interface and these appear to be very similar, so time will tell here, but it has been suggested that the quality on these newer units is slightly better than the original Advance Panels. This is pretty odd when the Advance panel costs £24,000 and the Mini only £2500? When you compare the quality to the old original DaVinci 2K panel (yes I'm that old), this becomes obvious, but if you've only used the Resolve interface this shouldn't worry you too much.

While the DaVinci Resolve Micro Panel is portable and easily set up, at 5KG and £800 I wouldn't want to move it too much, but if it was staying put for some time then great! WHile the weight doesn't make it so transportable, it does mean its not slipping and sliding all over the desk surface, which is something the Tangent Elements panels can suffer from!

Here's a good review from Dado Valentic on the Micro panel (not mini as he says) being adopted in place of a Tangent panel.

Review of the Micro Panel from Dado Valentic


Similar at this price point is the now old, but still very capable, Tangent Wave Panel which comes in a little over £1000 but over the Micro panel is does offer programmable buttons and therefore more flexibility and is also connected and powered through a single USB cable. 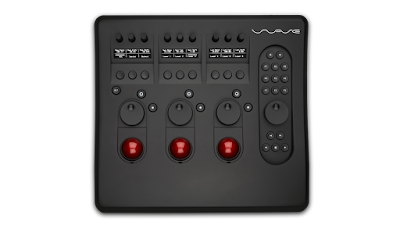 Still a firm favourite and found all over

This is the bigger brother of the Micro Panel and offers a greater array of controls through additional function keys and two control panels screens placed on the kicked rear panel..

The unit is bigger than the Micro panel (obviously) and is powered through AC, 12V 3 pin supply so can be powered on set etc, or more interestingly through a POE Ethernet cable. Communication to Resolve is through either USB-C connector or via Ethernet for longer runs between machine rooms and the panel.

As you can see below the Mini picks up where the Micro stops, with the lower part of the control surface being identical. However the kicked panel on the rear of the panel offers advanced function with some remap-able buttons and 2 displays panels which allow you to navigate control pages and vary parameters at the push of a button and the twist of a knob.

The Mini feels much more like a facilities panel, with the extended functionality being offered through additional keys as well as the two mini panels which are obvious when you first see the panel.

These panels offer you access to controls and then the ability to scroll through additional functions within the controls pages. Very neat!

Here is a great 'out of the box' review from Josh Petok which gives some great comparisons between the Tangent panel and the Mini.

As mentioned earlier these panels are designed to only work with Resolve 12.5.5 as this release has had the control surfaces added into its Control Panel. As you can see below. The advantage here is that installation is plug and play for USB connections but you'll need to choose Ethernet if you are connecting the Mini via Ethernet.

Unlike the other panels in the list there's no need to worry about drivers and installers as they are part of the Resolve application.

Its recommended that the feedback be dialled in through the Resolve Settings, this is detailed in the Resolve Manual and is something I would usually set up with the operator and they ultimately will control as they are personal preferences. The figure 75 appears to be the value that is commonly used rather than the factory set 50.

Both the Micro and Mini Panels also have the ability to disassemble the track balls and rings allowing them to be cleaned which keeps them nice and responsive. Just watch out for coke being poured into it!

I really like the look and feel of the panels, even though I'm not an operator. From an engineering point of view the panels are well made and offer some form of continuity between all the control surfaces meaning what you learn on the Micro can go right the way through to the Advanced Panel. If DaVinci Resolve is your main grading platform then I would recommend either of the new panels as they are easy to integrate with Resolve and of a good quality build.

If you wanted  a panel to use at home or have as a freelancer then the Resolve Micro Panel is a great buy. It would also make a good buy for Colleges and Universities wanting to offer students a taste of working with an interface that they would meet in a high end grading suite.

If you're a Post House with a dedicated Resolve suite and your looking for a control surface I would recommend the Resolve Mini Panel as this really has good extended functions and a presence that means the operator gets the best from it and the client feels like they are in a professional grading facility, assuming that the environment reflects this as well (Quality Grading Monitor, external scopes and a controlled environment etc.)  .

That said the price of the new panels does bring a light onto the current cost of the Advance Panel, surely this should be reduced if they can build good quality units for sub £1000 and £2500 then perhaps the Advance should be half its current price (button differences aside) which is £25,000?

If you are a travelling DIT, or have a number of preferred grading suites (Nuke / BaseLight etc) I think I would still go for the cheaper Tangent panels such as the Tangent Ripple as this gives the flexibility of using it with almost any grading system and is much smaller to transport with a laptop and currently at £300 on Amazon at the time of writing, it manages to retain an OK build quality and feel. Its track balls are removable and do click and clack a little but at this price point what do you expect? Its all still horses for courses.

Other Posts - Operational and grading experts

Here are a number of great posts that I have read on the panels, from experienced and respected graders.

Alexis Van Hurkman - New Panels review
A professional grader with an Advance Panel for comparison and a beat tester too. A must read