Black Magic - Studios for All

April 20, 2017
I'm just knocking up this short post about the ridiculously small and cheap components that can now be bought, thrown together out of the box and in effect bring you a HD studio that fits on your desk!

I remember back in the middle 1990's when a Grass Valley GVG100 was the entry into Vision Mixing desks and were found in broadcasters or the more upmarket 'Video Houses' of their day. They were very basic, analogue and still carried a massive price tag and were also complimented by at least 3 VTR decks, usually a CMX3600 controller an array of monitors and an engineer to help keep it all going. I need to stop before I start tearing up! 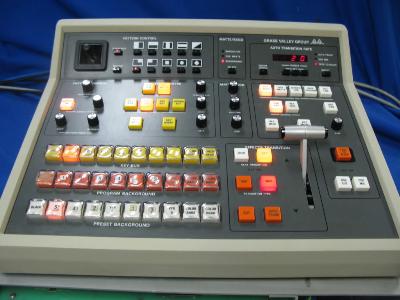 But then along came BlackMagic and changed the shape, and price tag, of the vision switcher forever. Oddly enough I did find an article about converting a GVG110 into a panel for use with the BlackMagic ATEM! But I digress.

The BlackMagic ATEM Television Studio HD unit is their latest offering and while I haven't had the chance to play with one it reads somewhat amazing for a 1U unit that isn't even full width!

Operate the unit from the front panel!

Good selection of Inputs and Outputs for a tiny unit!

Connections
Starting at the rear the unit has 4 SDI and 4 HDMI inputs and appears to support most formats people would need up to 1080p60! As it also boasts an automatic frame re-synchronizers, so you don’t need genlocked cameras.
It has 2 Analogue XLR audio inputs for your Mic's or mixing desk. The Ethernet port is for an external panel, though it can be controlled either on the front panel or through a software mixing desk, and the USB port is for updates I assume, as this is usually the case with their units.
There are dedicated SDI and HDMI ports for the built in Multiviewer!? It can display all 8 camera feeds as well as Program Out and Preview channel. It also appears to offer PPM's in vision too. Last but by no means least there's the Program Out SDI feed!

Did I also mention that it also has built in TalkBack?

Control
Out of the box the unit can be controlled by using the 8 large illuminated buttons for switching between sources.

"There are buttons for the down stream keyer, fade to black, media players, and cut-bus style or automatic switching with transitions. The built in LCD screen lets you adjust all switcher features via menus, plus it can be used for video and audio monitoring, aux control and to display the audio channel you’re adjusting." 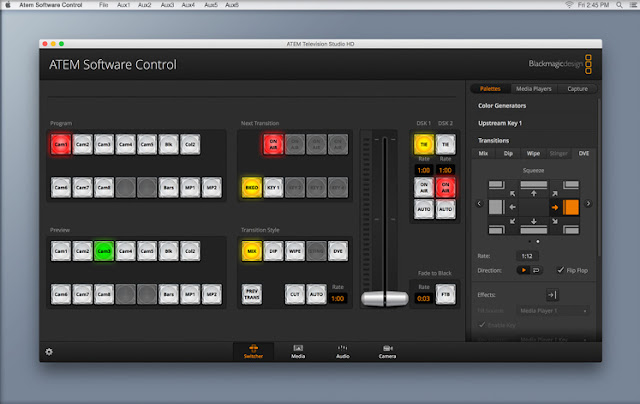 Software switcher control, would be interested to see how this works in practice.
Especially the T Bar!

For a much more control the Studio HD comes with a free software control panel for Mac and Windows PCs. You can use the switcher and parameter palettes to switch cameras live, change transitions and adjust key settings. You can also load graphics into the switcher directly for display or keying, control the built in hardware audio mixer, control cameras, program and activate macros as well as automate clip playback from decks.

Through the software you can also 'Rack' your cameras, with control over the iris and focus, some camera settings (BlackMagic cameras only?) and colour balance / correction. I assume this works on both HDMI and SDI sources.

The unit also has a built in 2D DVE (as good as my beloved Abacus A57?) that offers 2D PIP a a range of Transitions and wipes. It also has an Upstream and Downstream keyer!

Hardware panel for those that need it- Approx $5000


All in all the unit reads very well. With simple controls this mixer would be great in so many applications. I would hope that Colleges and Universities who could afford to invest in a studio for students would take up with this little offering!

Couple the switcher with the Hyperdeck Studio Mini and you can record your program out and perhaps push this on to the Web Presenter to give live streaming of your content. All in $2000! I have no need for one, but I want one!