June 07, 2017
Say Avid and most people will think of Media Composer, but Avid has long led the charge into the Newsroom with the likes of iNEWs and Interplay for well over a decade but it has had limited penetration onto the actual studio floor. With the acquisition of ORAD, Avid has moved ever closer to a complete news room and studio solution now being able to offer On Air Graphics through to Video Walls and Augmented Reality (AR) sets. In this post I will only be looking at Avid TD Control.

Large screens displays have long been a part of the Newsroom floors but they tend to be used as merely expensive backdrops to the presenter and do not always lend themselves to enhancing the story telling process.

Traditionally animations and interaction with the video walls would have been facilitated through the Vision Mixer, becoming a drain on resources as well as being complicated to operate and maintain.

TD Control gives the user the ability to manage and integrate live video feeds into the walls without draining switcher resources, giving them more control over the content making the story more interactive and relevant without the need to have large numbers of operators or complicated set up.

TD Control can playback up to 16 HD/SD SDI sources as well as a number of file based clips, which can be looped for use as animated backgrounds within the walls. Users can display visuals at up to 16x the size of the HD-SDI video outputs as well as display different formats simultaneously across inputs and outputs, including SD, HD, Ultra HD, and other high-res formats. This allows users to have displays of any size and easily control how each display shows its content with a press of a single button!

Any size canvas can be generated and controlled in a HDVG

Displays are defined as Canvases within TD Control, which can be triggered individually to change their content or grouped together to have all content changed with a single animation. It's also important to appreciate that within a single canvas multiple feeds can be placed allowing you dynamically re define displays without the need to adjust the canvas! This means that the viewers experience can be representative of the studios monitors without the worry of accounting for any changes that have been made within the presenters back drop.

Confidence of what will be used next can be assured through a Program and Preview monitor, ensuring the right content and format is always used for your production.

A TD Control system is made up of a controlling server and a TD Control Engine, the High Definition Digital Video Graphics unit (HDVG) which houses the powerful pixel engine and facilities all the video to the displays as well as the sources that are made available to it.

The control over this engine means there is only a 2 frame delay between incoming video and it being utilised within a video wall. This allows presenters to talk with remote co-hosts and hold a conversation without worrying about delays in the signal. 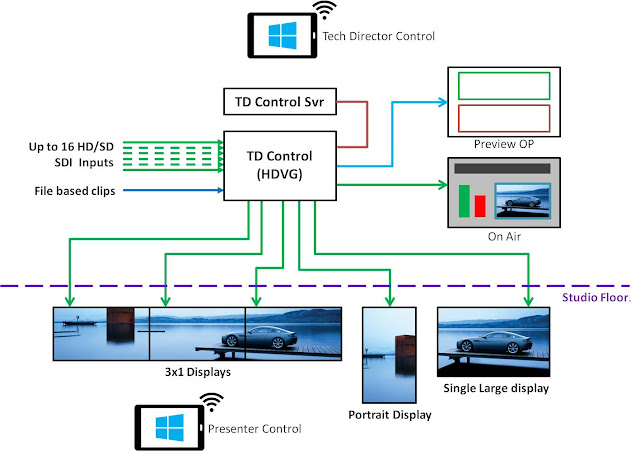 Example of using a TD Control system on the studio floor

Signals can be presented to the HDVG unit in a number of ways but in general is through either the switcher or the router. These can be controlled by the TD Control through either serial or Ethernet protocols.

The system also integrates into iNEWs or any MOS gateway enabled Newsroom system to allow events to become automated throughout the rundown of your program. The system can also be controlled by various automation systems such as Grass Valley Ignite,  Ross Overdrive, SONY ELC and Viz Mosart allowing various canvases to be triggered and controlled.

Through its simple windows touch screen control the system can be used in a hybrid environment where some items are triggered automatically but other still be manually controlled by the Operator, or even the presenter making it ideal for interactive non scripted events such as Sports or any late breaking live news feeds.

Live data-streams can also be fed into the TD Control to allow dynamic metadata content to be used within your studios displays. A single animation can still be used to trigger content that is defined by your data feeds, reducing the worry and complexity of the system.

Once the core system needs have been established and the workflow accounted for the obvious question is how do you operate it?

Operation of the system needs to be simple if it is to slip into an existing productions workflow and not take extra operators to achieve this.

The TD Control client software can be used on any windows based touch screen PC such as a Windows Surface. The PC can be placed along side the switcher, meaning the entire system can be controlled within a single application with the touch of a button on the interactive screen (X-Keys can also be used.)

By simply selecting windows that are representative of the displays you want to control, sources can be loaded for preview and then placed into the displays on the studio floors as either cuts or animated transitions.

This means that the same Technical Director only has to concern themselves with which button to press and when rather than worry about the sources that need to be routed through the desk.

The TD Control interface can also be locked down and simplified so that a presenter can control when to take the next item, or use dynamics such as IR systems to trigger the walls content.

TD Control offers users the ability to expand the use of their current video walls to give them a more dynamic presentation with little operational overheads.

The system can be easily adopted to compliment existing solutions and workflows. It's simple operation means existing staff can still accommodate the control of the system along side the switcher with minimal experience.

With consistent delays of 2 frames within unit, this means that all latency can be compensated for no matter what the source.

Sets can easily be reinvented and re-purposed for the following season or for any event with TD Control as various production 'looks' and designs can be easily loaded and recalled at the touch of a button!

Thanks to Alon Stoerman at Avid for taking the time to take me through the system and checking my post for mistakes.